Can clean growth provide prosperity whilst being sustainable?

With COP26 on everyone’s minds, citizens around the world are hoping that the new momentum and political commitment will help improve the current trajectory of global emissions. At this crucial juncture, we would like to pause and re-think about what financial system(s) would work best for a net zero future.

The UK government’s Clean Growth Strategy, an ambitious blueprint for Britain’s low carbon future which was announced in 2017, proposes that the whole country can benefit from low carbon opportunities while meeting national and international commitments to tackle climate change.

But is it really possible to grow our national income while cutting greenhouse gas emissions? As it becomes more and more obvious that the current growth model is unsustainable, what sort of financial system should our net-zero future follow?

Join Cambridge Cleantech and Michael Page at the Cambridge Union to debate on whether clean growth can provide prosperity while being sustainable. Join us after the event for light refreshments and a tour of the Union, including the Historic Library, Kennedy room, chamber, auditorium, and The Orator. 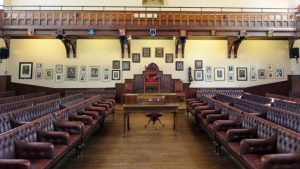 Pippa is a climate tech investor for early-stage businesses creating scientific innovations to accelerate the zero carbon transition. She is the Founder and Director of Zero Carbon Capital.

Mark is the Business Development Manager at Clean Growth UK, a national innovation network of over 2000 businesses & universities.

Douglas is a Professor Emeritus of Environmental Science and Policy at the University of North Carolina at Chapel Hill. He retired in 2017 from his role as Director of Cambridge Centre for Climate Change Mitigation Research (4CMR).

James is part of the Green Party and is an upcoming candidate for the Castle Ward. He also is a writer and filmmaker with a focus on neuroscience & cognition, shamanism, the natural world, and rewilding.

Meg is a writer and activist working towards global climate justice and equity through accessible and intersectional climate communication. She works with various organisations, including Rewriting Extinction, the Any Last Words? Climate Writing and Art Competition, BBC Radio Norfolk and Norfolk Wildlife Trust.

Clara Todd is a founder member of Cambridge Doughnut, a local group bringing principles of Doughnut Economics to Cambridge: ‘meeting the needs of all people within the means of the living planet’ (Kate Raworth). She is currently studying Regenerative Economics at Schumacher College.

In every debate there is a motion: a statement, idea or policy that is disputed and framed within the prefix ‘This House’. Usually, the motion is either a policy which changes the status quo (e.g. This House Would Provide All Police Officers With Firearms) or a statement, the truth or falsehood of which is examined in the debate (e.g. This House Regrets the Decline of Marxism in Western Liberal Democracies). There are two sides to the debate: the government and the opposition. The government, also known as the proposition, supports the motion whilst the opposition opposes it. After the debate, the judges will decide which debaters were most persuasive.

In this event, three speakers will defend the idea and three will oppose it. They will each have 10 minutes to speak.

View our other events