Circular economy of tyres: the end is just the beginning

Our reliance on tyres and their ubiquity in modern mobility makes them a high priority target for the circular economy.

The end goal is the ability to retrieve and reuse the raw materials from which they are made – making a truly circular economy of tyres (see our blog Circular tyres: a new challenge for the circular economy).

One focal point is the optimisation of new tyres, in a bid to reduce their environmental impact and increase their reusability (see our blog Green tyres: wheeling towards sustainable rubber).

However, most tyres in circulation today are made of ordinary natural rubber, so to tackle the immediate problem and accelerate our transition to a circular economy we need to look at how we might treat traditional rubber tyres at the end of their life. 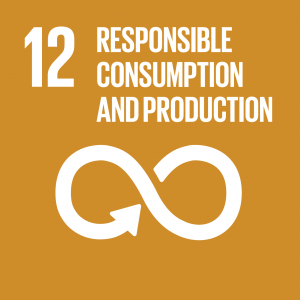 Despite its natural origin, tyre rubber is not readily compostable. Indeed, like many modern plastics, tyres are specifically designed so they do not compost – in order that they can survive everyday use.

The rubber component of a tyre takes an average of 150 years to decompose in nature, which is fairly quick compared to the 500 years expected for plastic shopping bags. But, this still means that Dunlop’s very first commercially available tyres would today only just have finished decomposing (see our blog Patents driving tyre innovation).

In any case, the uncontrolled decomposition of tyres releases toxic organic compounds and heavy metals, which left unchecked are harmful to the environment and human health. In addition, the carbon black component is gradually oxidised and released into the atmosphere as carbon dioxide, so is both unrecoverable and contributes to climate change.

However, by taking control of this decomposition process, speeding it up and directing it towards useful materials, it has the potential to transform the circular economy of tyres.

Previously, we have focussed on developments in devulcanisation, where hard wearing vulcanised tyre rubber is broken down to its softer devulcanised precursor for reuse (see our blog Circular tyres: a new challenge for the circular economy).

Although great leaps have been made to improve devulcanisation, the main barrier to large scale adoption of this technique is a lack of control over the output rubber. Nowadays a huge range of specially tailored compositions are used in tyres, so devulcanisation of one tyre may produce a rubber which is completely different to the next. As a result, tyre manufacturers are hesitant to include large quantities of devulcanised rubber in new tyres, for fear that the unknown rubber will compromise their own finely tuned formula.

Pyrolysis goes a step further than devulcanisation – and separates the rubber into pyrolysis oil and char. This gives much more control over the new tyre’s composition even when using a high proportion of recycled material.

Pyrolysis is carried out by heating the tyre at high temperature under an inert atmosphere, so the more volatile components (pyrolysis oil) are vaporised and separated from the less volatile components (char). This requires temperatures of around 600 oC, which is much hotter than the 200 oC required for devulcanisation. More energy and more specialist machinery is also needed to refine the separated products before they can reused as pseudo-virgin materials in new tyres.

But despite the initial energy and processing costs, the end products are much more useful. 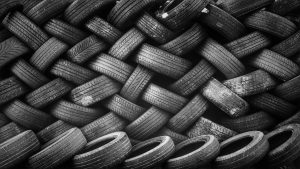 Traditionally, the main use for pyrolysis oil has been as a ‘carbon neutral’ fuel – in boilers or for the generation of electricity. However, despite fuel oil demand dwindling, demand for refined pyrolysis oil is growing apace. This appears to be driven by increasingly turbulent crude oil prices and mounting pressure for industry to look towards ‘green’ feedstocks. As a result, the price of pyrolysis oil is at an all-time high – which has energised significant investment into new research and infrastructure.

Enviro Systems, a Scandinavian company, are spearheading research into reactor designs which improve the efficiency and consistency of pyrolysis. Their recently granted European Patent (which is being prosecuted worldwide) relates to an innovative new pyrolysis reactor aimed at achieving unprecedented efficiency and repeatability.

This reactor uses a perforated central inlet, arranged to evenly disperse super-heated inert gas through a bed of ground rubber. The key to its effectiveness is the pressure drop across the inlet being greater than the pressure drop across the bed of ground rubber – resulting in uniform rapid heating. Enviro Systems claim that this reactor can process around 30 million kg of tyres a year yielding around 14 million kg of pyrolysis oil.

To support this innovation, strategic partnerships are starting to emerge across the tyre industry.

For example, as of December 2020 Michelin (the world’s 2nd largest tyre producer) are finalising an agreement to purchase a 20% stake in Enviro Systems. Their joint venture aims to deploy Enviro’s pyrolysis technology on an industrial scale and secure Michelin’s supply of pyrolysis oil for their own tyre manufacturing plants.

Likewise, in September 2020 BASF (the world’s largest chemical producer) signed a supply agreement with New Energy for 4 million kg of tyre-derived pyrolysis oil per year. BASF intend to process the oil for high quality automotive applications – emphasising that the oil is indistinguishable from its crude oil equivalent.

Accompanying pyrolysis oil as an output from tyre pyrolysis is char: a mix of carbon black, inorganic salts and non-volatile organic impurities. Although generally less valuable than the oil component, char is quickly becoming a focus for innovation due its low environmental impact. Carbon black recovered from char produces around 80 % less CO2 than virgin carbon black during production – a saving of 2,000 kg per ton.

Spurred on by these green credentials, Swedish manufacturer Trelleborg Group have recently partnered with Enviro Systems to use their pyrolysis-derived carbon black in the manufacture of rubber seals, gaskets, plugs and solid tyres.

Aside from carbon black, the impurities in char also have significant commercial value. Industry pioneers are therefore looking at ways these can be extracted and reused.

Avon Rubber, a client of Mewburn Ellis, have developed and patented a unique process for retrieving silica-containing products from tyre-derived char. In practice, the silica products have been shown to be indistinguishable from non-reclaimed materials, so can notionally completely replace virgin silica products in new tyre compositions, as well as in the rubber components of Avon Rubber’s high specification personal protection systems.

In any field, to maximise the reuse of waste in new products and realise a truly circular economy it is essential that we can regenerate raw materials with comparable quality and provenance to their virgin ancestors.

In many ways the tyre industry is leading the pack in this arena – with the technology needed to make high quality pyrolysis oil and char products now maturing, and industry wide partnerships carrying this technology into the real world.

The next few years should prove exciting, as tyres are set to become more circular than ever before.

View other news from Cambridge Cleantech

Niles is an Associate and Patent Attorney working in the chemistry field. Niles has an MChem degree in chemistry from the University of Oxford. His undergraduate research project was on the synthesis of novel perylene diimide containing macrocycles for anion recognition and sensing applications.
Email: niles.beadman@mewburn.com
View original article here